From our pet cats to lions and tigers, they belong to the same family of animals, cats, which are thought to have first appeared between 28.5 million and 3,500 years ago and are the most developed predators of all mammals.

Existing large cats, such as tigers, lions, leopards, jaguars, and so on, are from the leopard genus, which is a very old group of cats, which began to appear about 10.8 million years ago.

Of all these big cats, tigers were one of the first species to appear, and because the tiger’s evolutionary timeline is stretched long enough to accommodate a variety of environments, it is also one of the most widely distributed cats, from Siberian low temperatures of minus 40 degrees Celsius to India’s 40 degrees Celsius Sundebens, without which tigers cannot adapt.

The genus began to appear about 3.4 million years ago and is the last surviving feline, including, of course, domesticated domestic cats, close relatives of African feral cats, which were first domesticated in the Near East about 10,000 years ago

If we go back to the roots, modern domestic cats and tigers date back 10.8 million years to have a common ancestor, but we don’t know why, we always like to compare cats and tigers.

In fact, in terms of genetics, cats and tigers have only 95.6% DNA similarity (no one comes with chimps), but they do have something in common.

The similarities between a cat and a tiger

First of all, cats and tigers are very similar in diet and habits.

Since their bodies are unable to synthesize certain nutrients, they must be highly carnivorous to make ends meet. They are lone hunters who like to mark territory with body grinding or urine, keeping their peers away.

In the 20th century, there were nine species of tigers in the world, but three did not make it to the 21st century, and although they lived in different regions, their fur was strikingly similar – yellow fur with black stripes.

Although today’s domestic cats are colorful (this is the result of selective breeding), but the earliest domestic cats have only one kind of fur, that is, tiger skin, this time the domestic cat is more like a shrinking tiger. 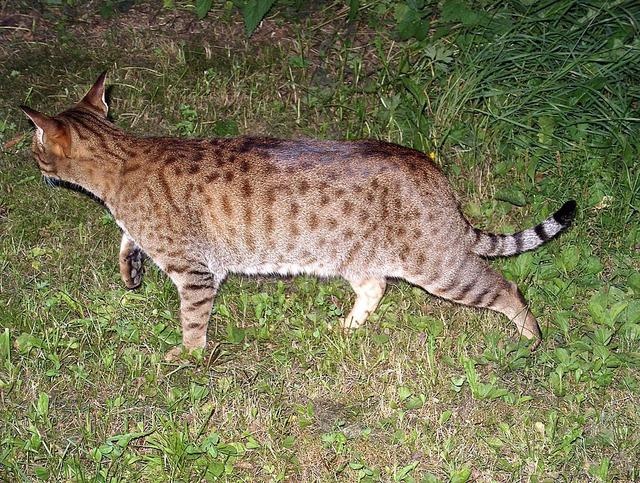 Pictured: Tiger-spotted cats with the same stripes as tigers

Tigers and cats differ nearly 100 times in weight, but their size or size is strikingly similar. They all have soft bodies, long tails for balance, thin heads with sharp teeth, and retractable claws that are ideal for hunting.

However, there are some obvious differences!

Because of the large size gap between the two, one of the biggest differences is that at heart rate, the larger tiger has a heart rate of only 56-97 beats per minute, compared with 140-240 beats for cats.

Smaller sizes and faster heart rates are inevitable because driving blood through smaller blood vessels requires more power, and smaller animals have to increase their metabolism because they lose heat faster.

In appearance, we don’t count their fur, I think the biggest difference between them is the eyes.

After 10,000 years of selective breeding, the eyes of domestic cats come in a variety of colors, but there is only one of their pupils, the vertical pupil, which is a typical predator pupil and is well suited to ambushing an evolutionary feature.

But tigers, like human pupils, are round pupils, which have something to do with their tall stature, and although tigers are ambushers, they don’t need to ambush like cats.

We said before that cats and tigers behave in similar ways, but their attitude towards water is very different, most domestic cats do not like water, but tigers like to swim and bathe.

It’s also related to their size, which makes it hard for cats to keep warm, so they’re more afraid of losing heat and naturally don’t like water.

There is also a difference in their tail habits, the cat’s tail is basically upturned (may have something to do with domesticated domestic cats), and the tiger’s tail is downward, at most to the horizontal position.

Tigers and cats are lone hunters, so they don’t need many facial expressions, and they lack the muscles to call them, which has something to do with how cold they look.

Fortunately, humans were not intimidated by the high cold of cats, and eventually domesticated them, making the small animal unprecedented success, with a staggering 5 billion populations.

Tigers were pushed to the brink of extinction, leaving only about 3,900 tigers in the wild.